Friday Seminar in African Studies: “I am so so very not sure”

My viva has been scheduled to 28 April, 2016, 10 am at the School of Graduate Studies, University of Ghana. I am excited and determined to do very well!

I will be presenting an aspect of my work at the African Studies Association’s yearly meeting in the US, this year in San Diego 19-22 Nov, 2015.

My panel is called Rethinking Decolonilaization and my paper will be on the topic of “Decolonizing Migration Studies using Narratives of University Students in Ghana”.

I am looking forward to attending this famous conference and hopefully making connections for future research!

This study examines migration aspirations among university students in Ghana. My interest

is in undergraduate students, a group that is largely overlooked both in African studies and

migration theory. The research was focused on migration aspirations, the first stage of any

migration venture, and carried out at University of Ghana, a large public university, and

was employed: focus groups, an e-survey (n=506), and interviews.

To understand how students view the option to migrate, I argue that an Africanist or decolonial approach must

be used. This can be achieved by letting Ghanaian students themselves explain the

phenomenon as well as by contextualizing Ghanaian university students’ migration

narratives, and not leaving out a critical view of knowledge production in the world.

option, however, migration aspirations are volatile, often include the aspiration for return,

and are driven by the ambition for further study, rather than being an end in itself. While

other researchers have described a “migration culture” in Ghana, my findings rather point

toward an “education culture”. However, financing such migration as well as the passport

acquisition process, present barriers such that although many students say they aspire to

migrate, most of them have not taken action like applying for a passport. This confirms

research findings that there is a gap between aspiration and ability to migrate. In addition,

my research reveals other reservations to the migration option, like fear of racism and

religious/moral concerns. Further, the students in my study suggest that lower-educated

themselves – I construe this as form of “othering”, not previously found in the literature.

academic results who are more likely to aspire to migrate. Further, the research established

earlier described in the literature, but for students in the Global North.

students in the Global North in terms of migration aspirations. However, while the latter

– and this is the discourse my study contributes to. While individual considerations among

Ghanaian students are similar to those of students in the Global North, I argue that the

migration environment is dissimilar, and to better understand the phenomenon of student

migration originating from the Global South, a more holistic approach is needed, inclusive

of historical, social, and political contexts.

Now the manuscript has been copied and bound in four heavy bundles and handed in to the Institute of African Studies at University of Ghana. Viva should happen before the end of the year! 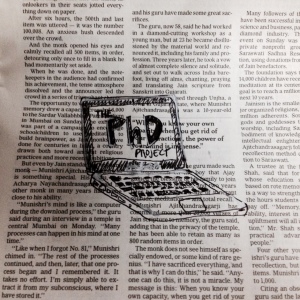 Percentage work done compared to plan: 50% (still, still! working on my theory chapter, but today is the very last day!)

Unforeseen problems: Hunting down the interviewees I want for the last leg of my field research.

Unforeseen joy: A phone call from a Ghanaian professor interested in my project!

Next week I plan to achieve the following: Interview 4 students and transcribe the results.

Now, my research seminar from March 5th, 2015 at Institute of African Studies, University of Ghana, is available on YouTube for those of you interested in my research. In this one-hour-seminar, I talk about the rationale for my research and results from my e-survey among university students in Ghana.

Next week I plan to achieve the following: Start interview process and EMAIL CH 1&2 to supervisors! Its is probably typical and tragic to not dare to send text. I know for a fact it is not the best, but I feel its too much work in progress to send now

Unforeseen problems: Suddenly not very productive although it was a break from work.

Unforeseen joy: Spending time with friends. Finding some solutions to ideas. Applying for a conference with an abstract that turned out well ( I think).

Next week I plan to achieve the following: Concluding the first two chapters by Wednesday and sending them to supervisors (WAY OVERDUE!), Thu-Fri finding interviewees in my database, doing the first interview and transcribing.

Pages written: 13 – including figures and tables!

Unforeseen problems: Insecurity, doubt and computer freezes (but found an on-point chapter in a methodology book on psychological effects of doing a PhD!)

Unforeseen joy: One the other hand a deadline gives energy and focus!

Next week I plan to achieve the following: Rest one day, then email supervisors, I need help with what goes where and maybe cutting some ideas out.